The Sinamatella area is defined by its hilly and rugged rocky landscape, interspersed with mopani woodland and vleis (grassland). Sinamatella has fantastic game viewing with high densities of wildlife, especially elephant and buffalo, and was once a stronghold for the black rhino in the region, though these have been decimated by poaching, with only a few animals remaining. Sinamatella was declared an Intensive Protection Zone (IPZ) for the protection of the rhino

We have had a permanent base at Sinamatella since 2010, where we have devoted our time to helping the Zimbabwe Parks and Wildlife Management Authority with rhino monitoring, game water and deployments.

a) Game Water – Bhejane Trust maintains the pumps it has in operation at Sinamatella, repairing any problems or damage caused by elephants to other factors. Although the solar pumps do not require diesel to be placed in them continually, they still require ongoing maintenance to ensure they are pumping at full capacity. We intend to install solar pumps at the new boreholes just drilled – Masuma dam ( to supplement existing system) and Lukosi River – an exciting new pan. 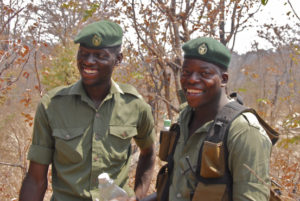 b) Rhino Monitoring – When Bhejane Trust first arrived at Sinamatella, one of its main purposes was to assist Parks with the monitoring and protection of the remaining black rhino in the area. Although we spend much more of our time on game water at present, we plan to keep on assisting Parks with monitoring this critically endangered species.

c) Assisting Parks in Management – As sections of Sinamatella are very remote and difficult to access, Bhejane Trust assists Parks with deployments of its anti-poaching teams and other essential transport needs. We also provide other help to the anti-poaching teams such as food and equipment.

d) Environmental monitoring – We work with the Parks ecologist at Sinamatella to monitor wildlife populations through road transect counts, static (24-hour) counts, vulture nest survey, bird atlassing and a study of the local giraffe population. Most of these monitoring projects rely heavily on input from our volunteers during the dry season.

e) Tourism infrastructure development – Recognising that tourism is an essential part of conservation, we have been involved in re-furbishing some of Sinamatella’s tourism infrastructure. We have rebuilt and enlarged the hide at Shumba, mapped and sign-posted the Shumba to Inyantue road prior to re-opening it to tourists and have helped with new developments at the picnic site at Masuma.

Projects to be Undertaken

a) Rhino – Sinamatella currently has a small and non-viable population of black rhino, which are dispersed over a very large area. Bhejane Trust has submitted a proposal to ZPWMA for the creation of a fenced black rhino protection zone to consolidate and protect the animals to allow the population to recover.

b)Game water. There are large areas of Sinamatella that hold very few animals in the dry season due to lack of water. We are trying to drill boreholes and install pumps in these areas, mainly as a short to mid-term measure to cope with the ever-growing elephant population. A good network of reliable water points over a wide area will allow Park managers of the future to turn off pumps on rotation, forcing the elephants to move and giving the vegetation time to recover.

c) Giraffe project. The giraffe demographics project that we started in 2017 has shown that there are more giraffe in the area than had been expected from other monitoring projects. It has also become evident that there is a great deal more work to be done on understanding Sinamatella’s giraffe population so we intend to expand the project both geographically and in terms of its aims. 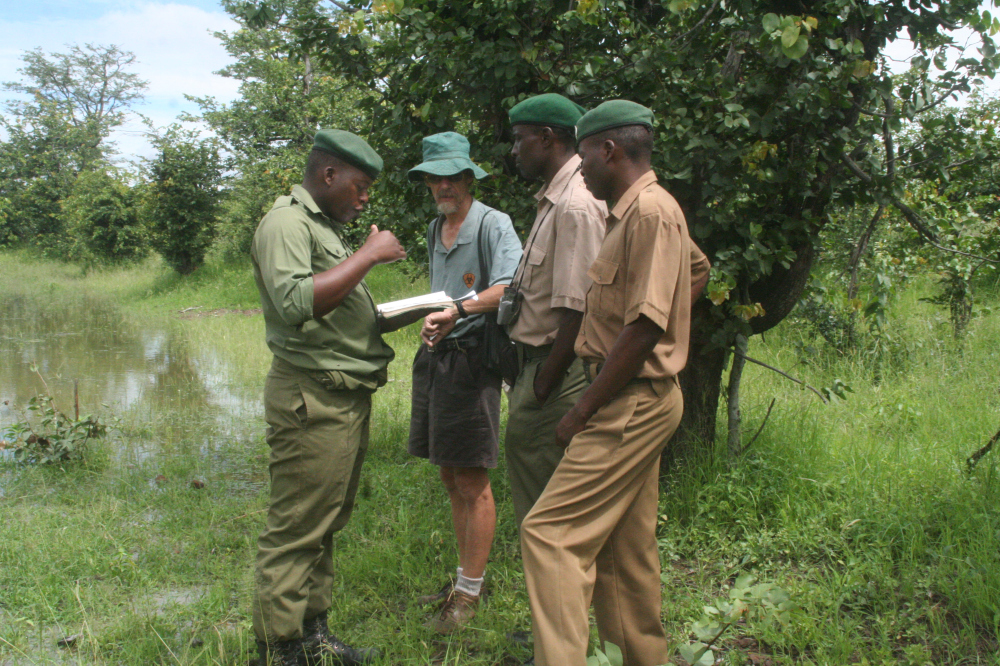 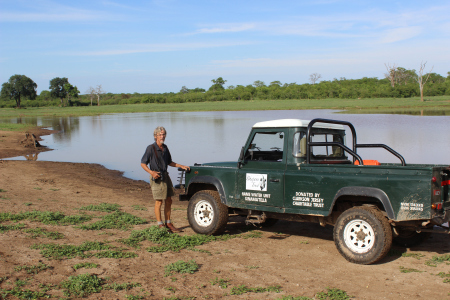 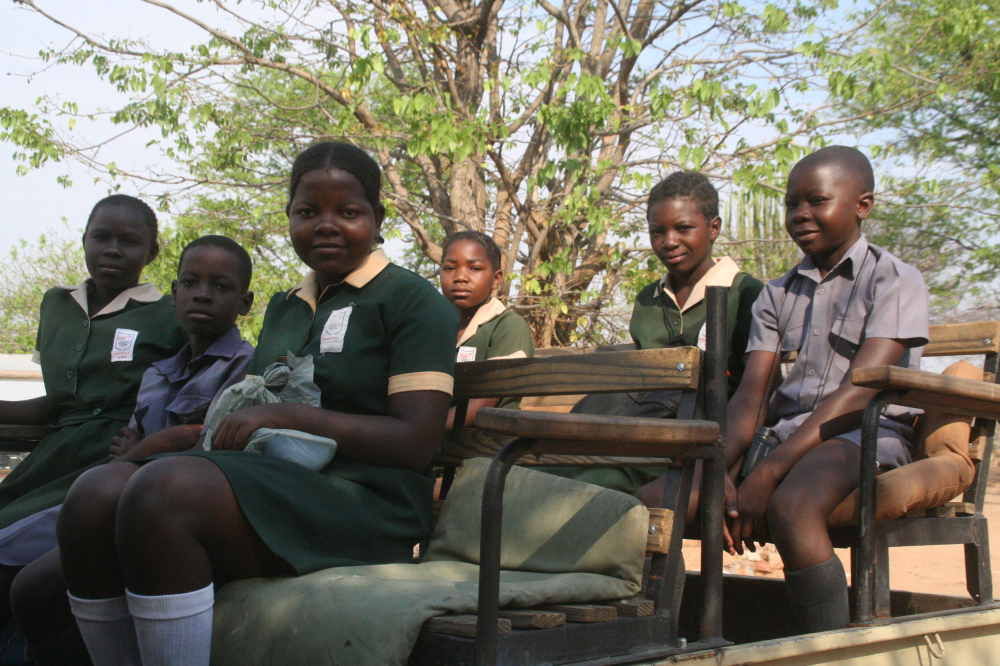 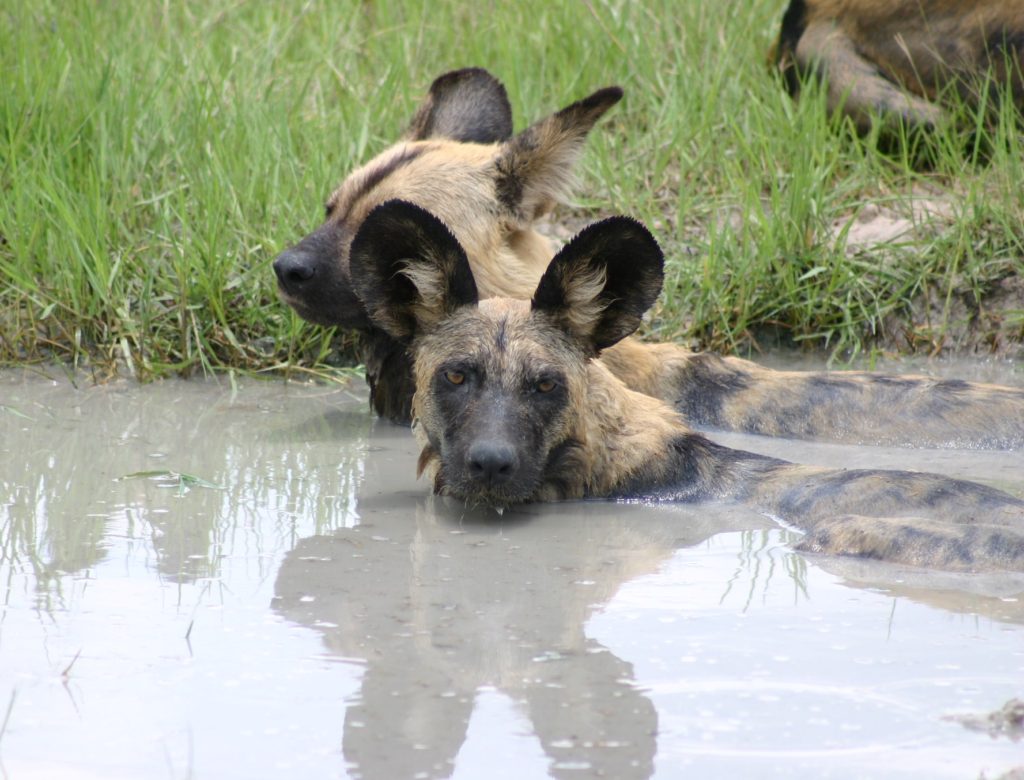 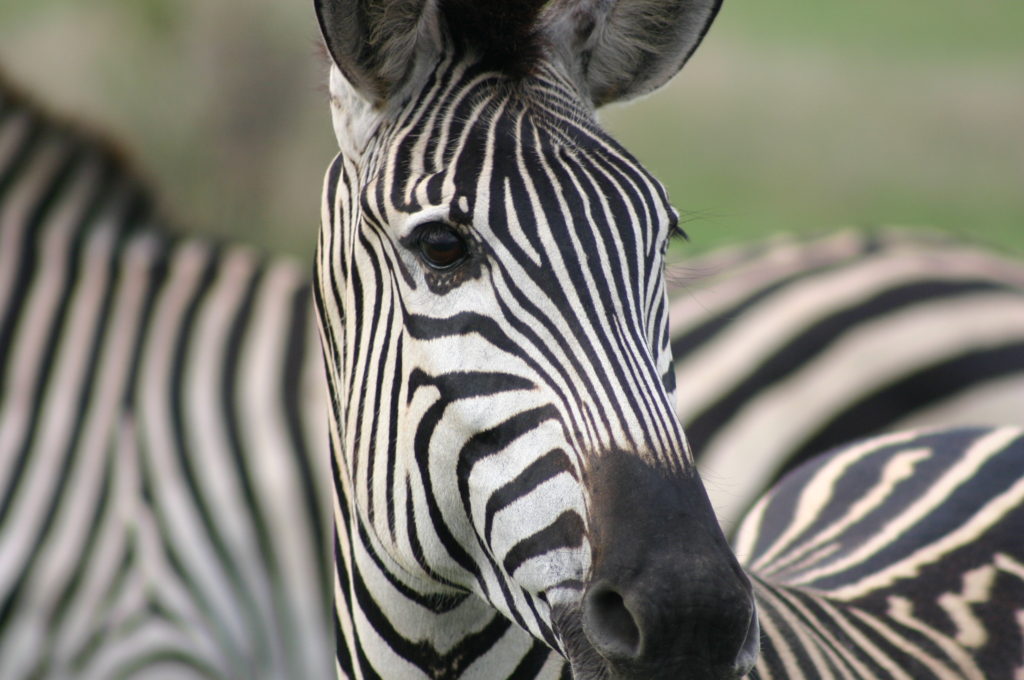 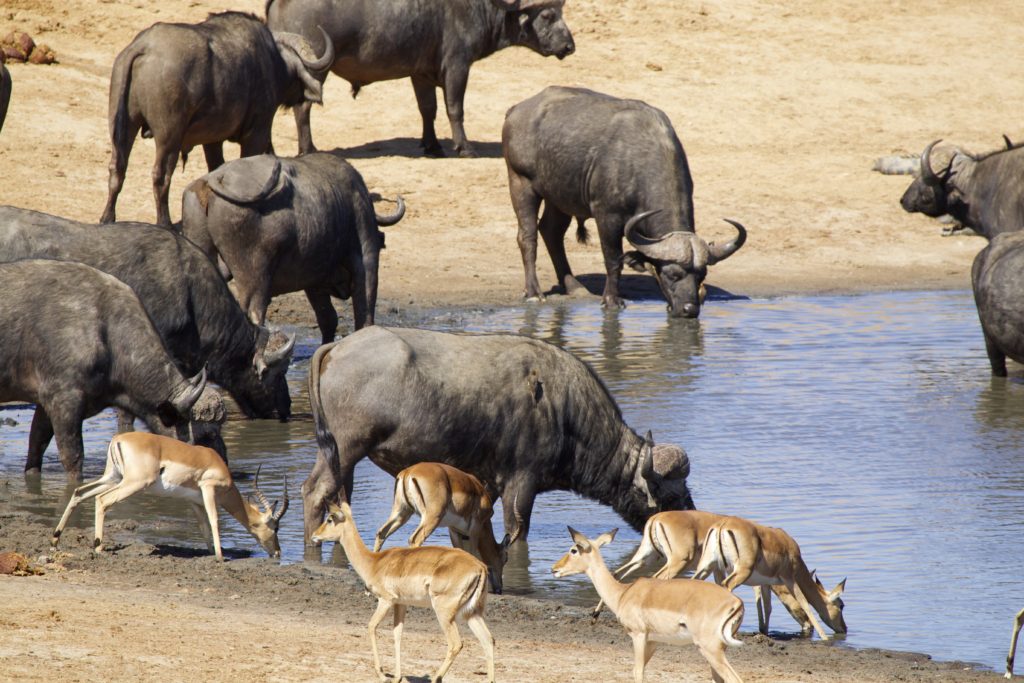 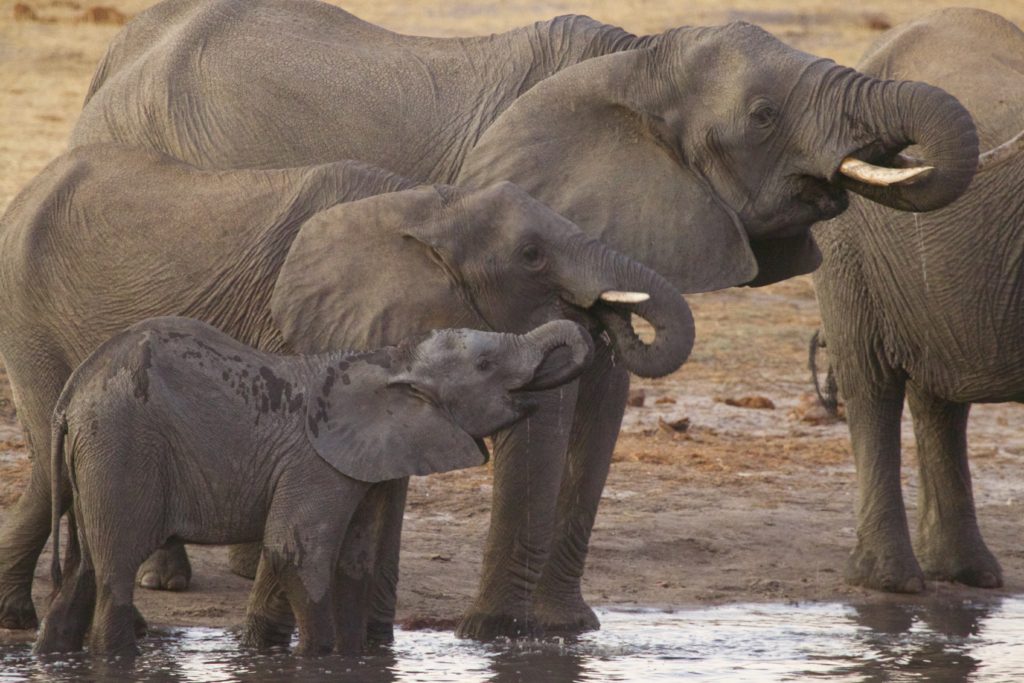 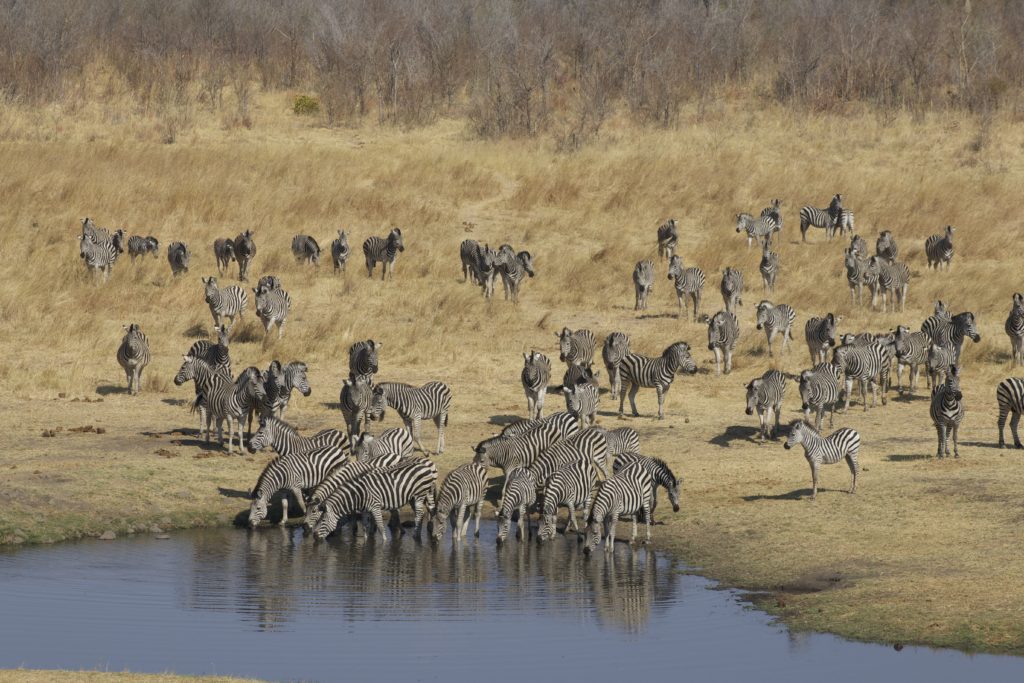 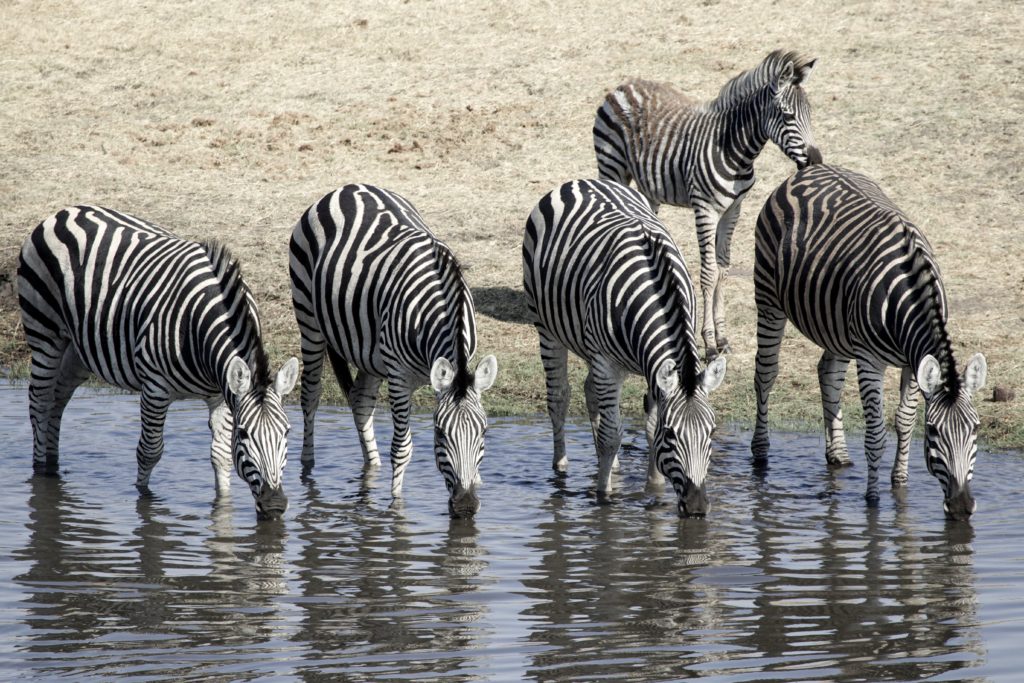 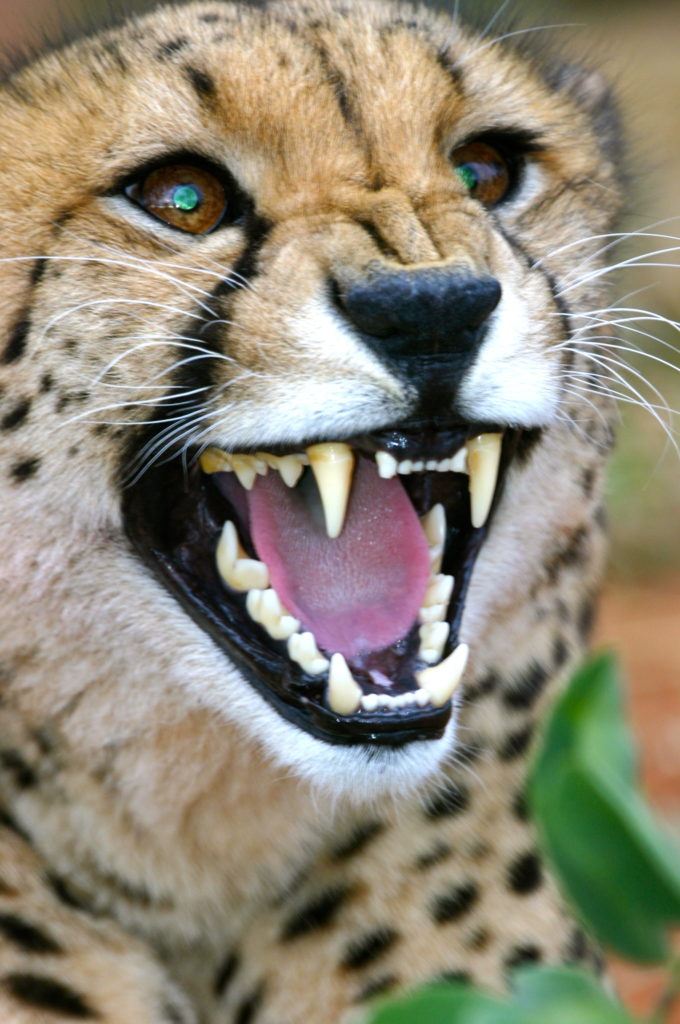 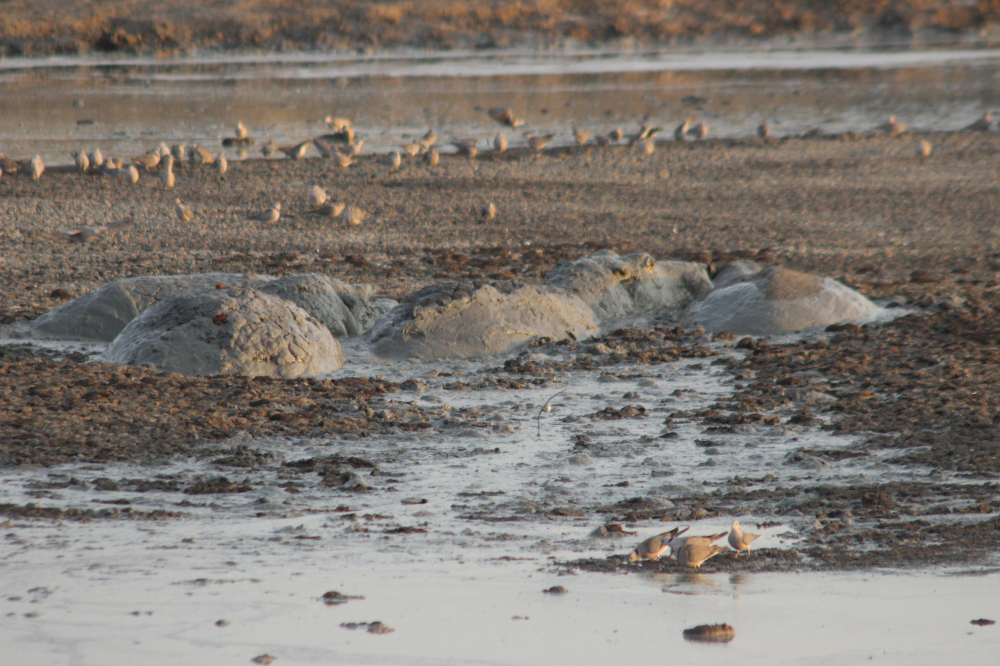 Hippo in Shumba Pan during a drought - before installing solar pumps 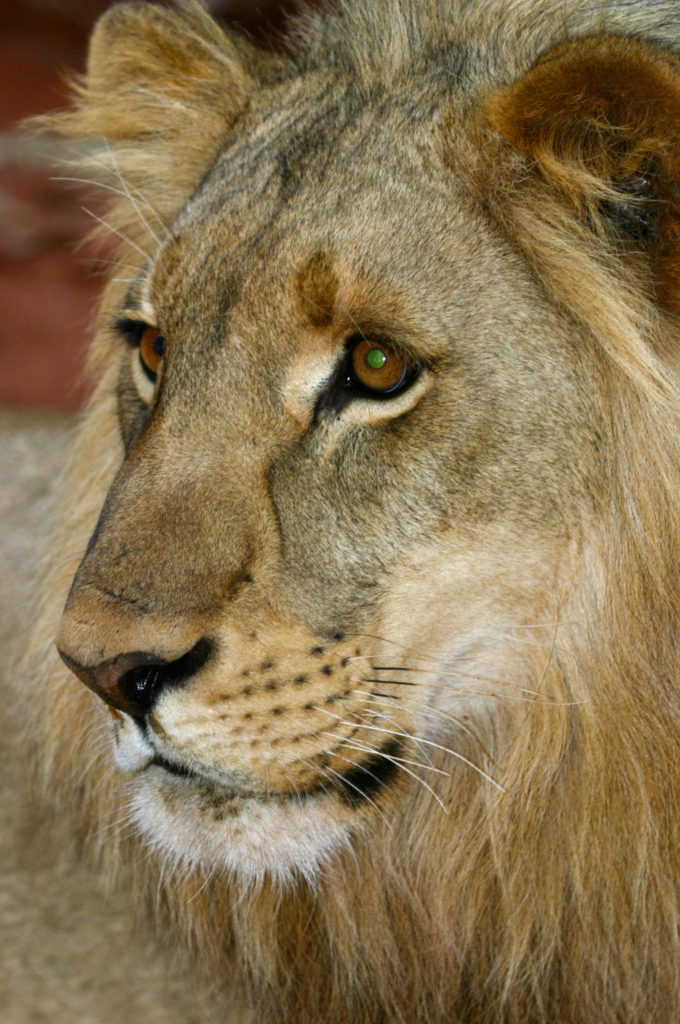 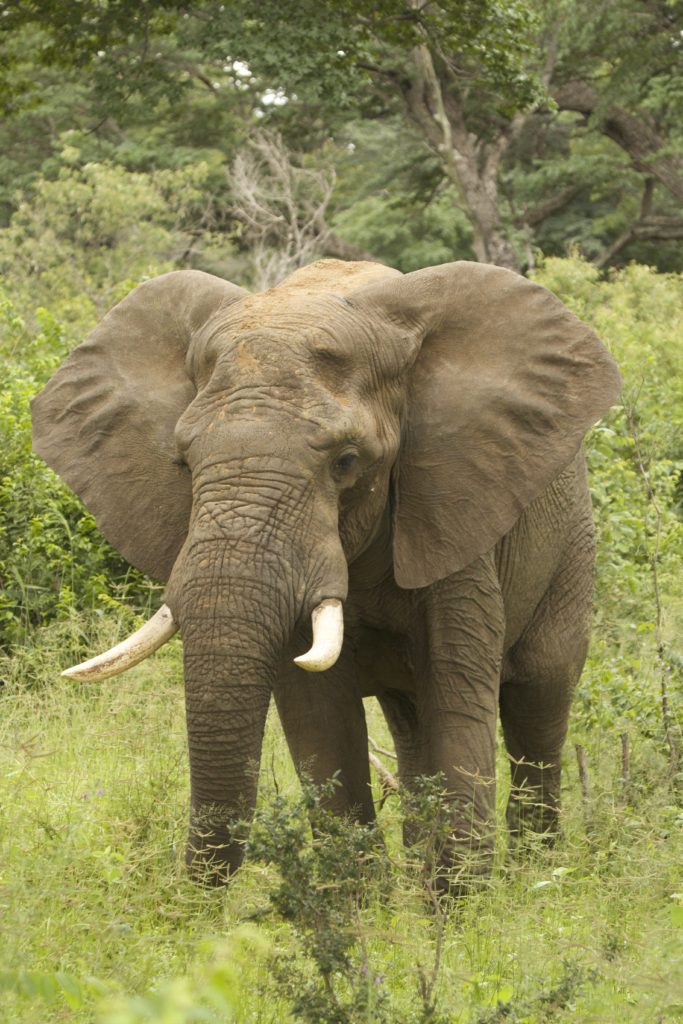 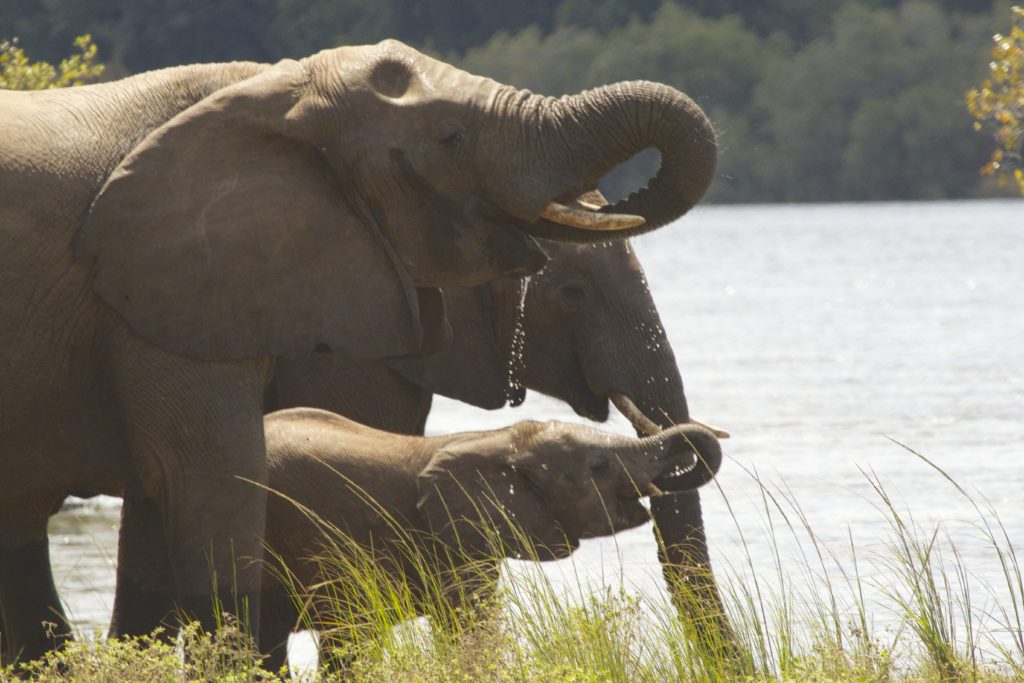 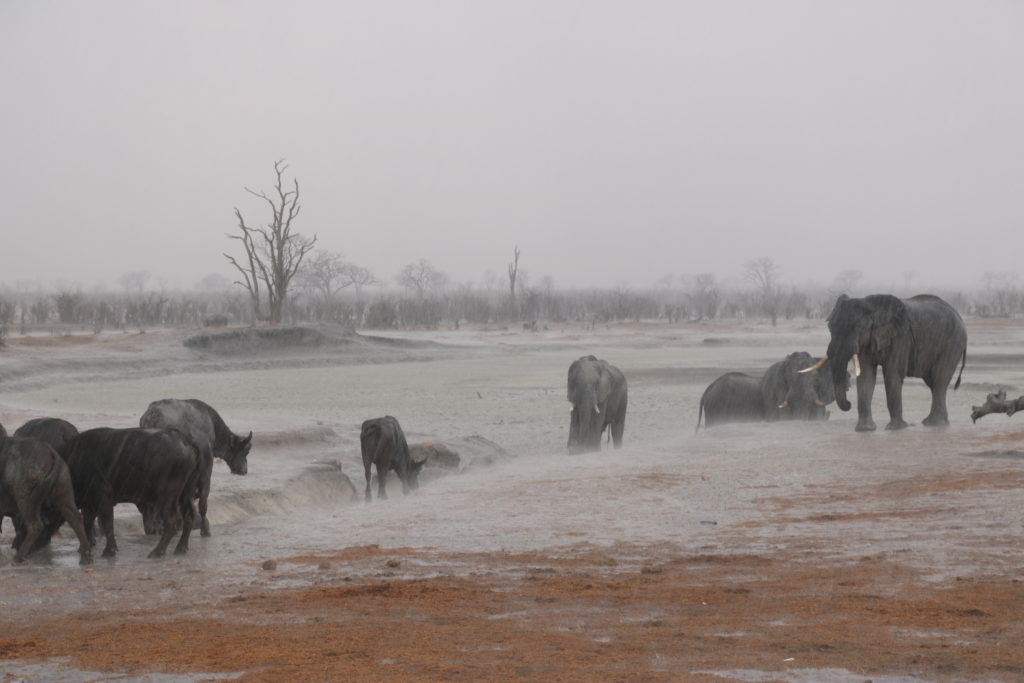 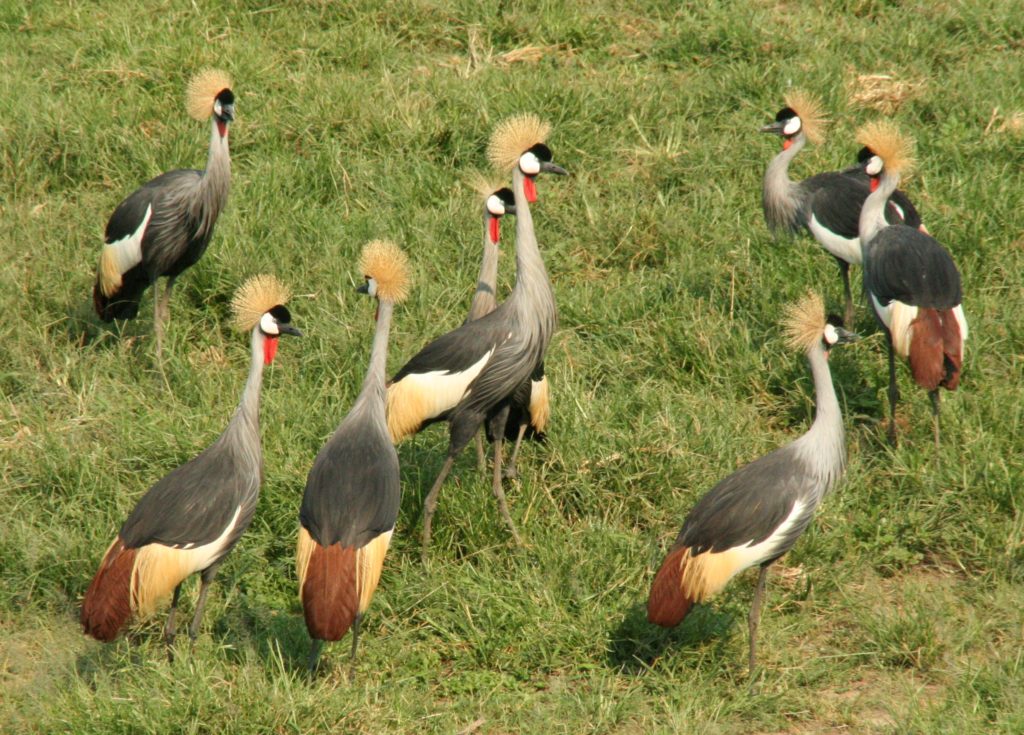 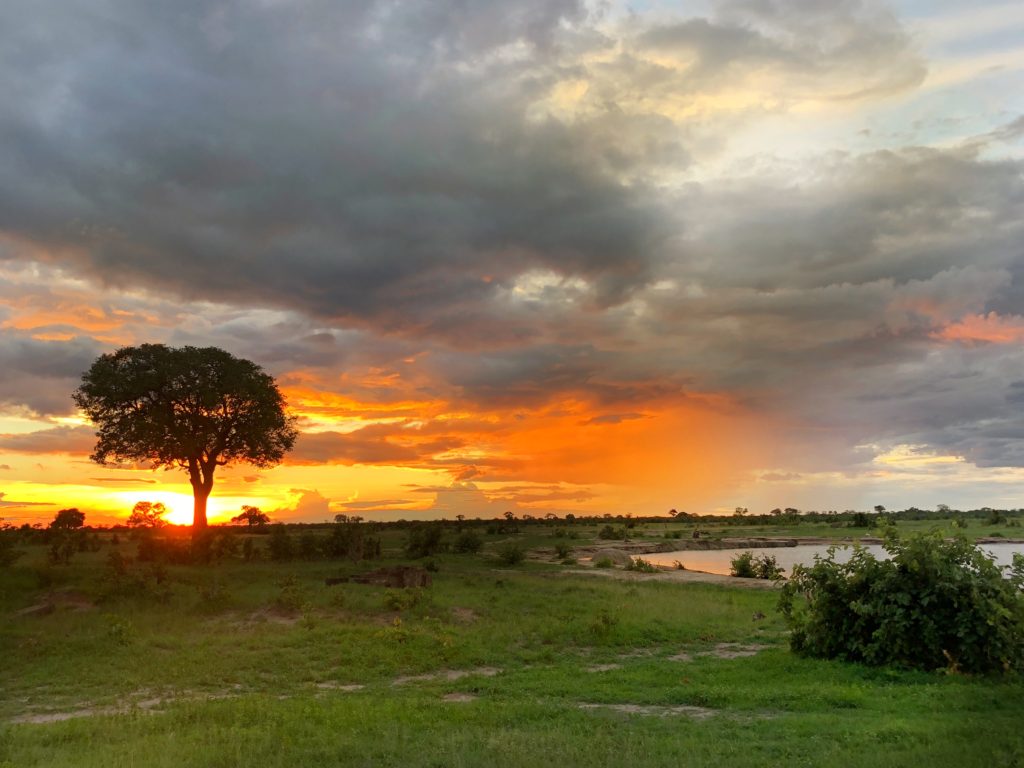 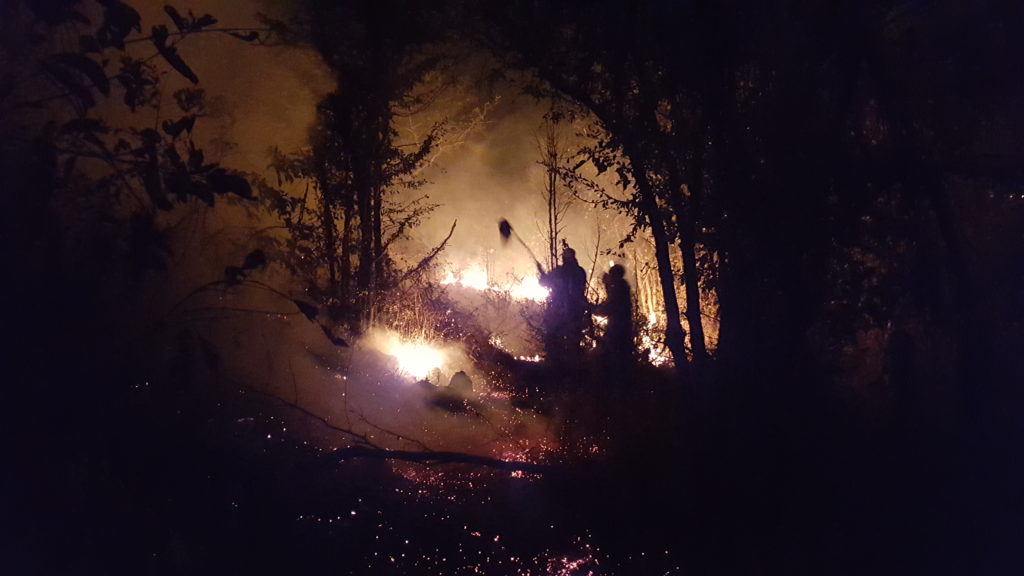