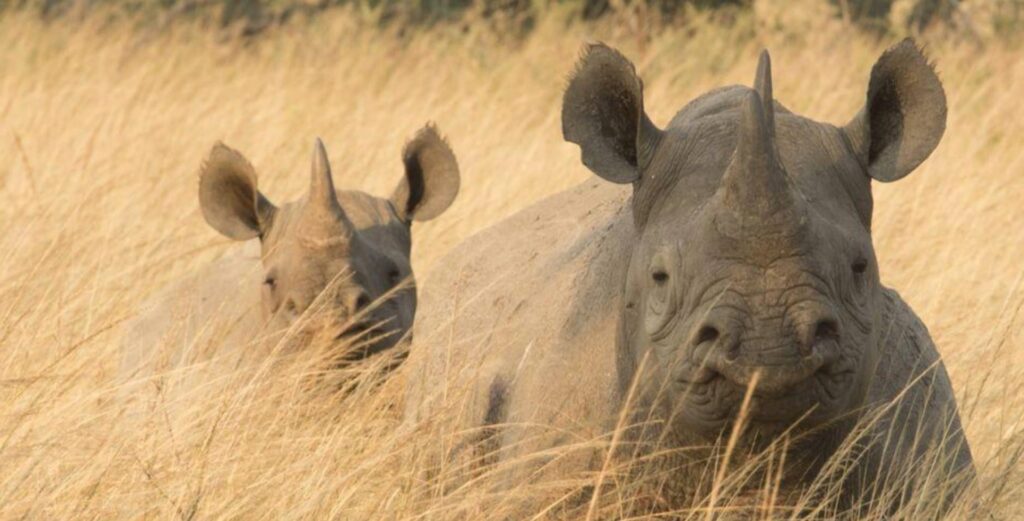 North West Matabeleland, incorporating Hwange National Park and the Zambezi National Park, was traditionally home to both Black and White Rhino. The Black Rhino lived in the rugged hills and bush in what is now the Sinamatella and Robins sectors of Hwange, and were recorded on the basalts of the Zambezi River basin above the Victoria Falls, while the White Rhino was widespread on the flat open Kalahari forest areas predominating this region, noted by F C Selous in numbers on the Dete Vlei in the late 1800’s. However, human influence in the early twentieth century through settlement, agriculture, and unsustainable hunting caused the rhino to be wiped out.
In the 1980’s, white rhino were reintroduced to Hwange from the Matopos National Park. These White Rhino thrived, but have unfortunately since been poached out in Hwange National Park.
In response to severe poaching pressure on the Black Rhino population in the lower Zambezi Valley, an Intensive Protection Zone (IPZ) was declared in the Sinamatella area where maximum protection and security could be offered. Rhinos captured in the Zambezi Valley were relocated to this IPZ. in the 1980’s.
The Black Rhino population in the IPZ was estimated at about 90 animals in the 1990’s, but unfortunately poaching over the last decades saw their numbers reduced to a population of under 10 today. These rhino are dispersed over about 2000 square kilometres of rugged bush, making monitoring difficult.

In 2018 we established the Rhino Monitoring and Protection Unit (RMPU), ably led by Nick Long, and which comprised a small team of Bhejane rhino monitors with selected Parks rangers. This team was highly motivated and very mobile, and their mission was to establish how many rhino existed in the Sinamatella area, their territories and ranges, and to try and ensure their protection.
The team soon established there were more rhino than originally thought, but found they were increasingly involved in anti-poaching, especially in the neighbouring Deka Safari Area, in their efforts to look after the rhino. The team proved adept at anti-poaching, and soon stopped the illegal charcoal burning on the Park boundary, stopped the fish poaching on the Deka River, and were responsible for nearly all the arrest of poachers in 2019 and 2020 in the area. On top of this, we still kept tabs on the rhino!
With the success of the team, combined with the increasing poaching pressures, it was soon apparent that we need at least another team on the ground, to monitor the rhino plus undertake the anti-poaching – we are working on this!
A big thanks to Dr Mark Bristow, and Hunters and Guides for funding our RMPU, and to Rhino Recovery Fund.

You can help us keep our wildlife watered and safe, and our Parks rangers in the field looking after our heritage!

All donations large and small are very much appreciated we require constant support and financing to keep our operations running, such as game water, road maintenance, rhino monitoring and parks deployments!